“Castle above the sea” is the name of Albufeira in Arabic, the language of the Moors who long ruled the Portuguese Algarve town.

Not much remains of the historic castle that gave the town its name, however, but Albufeira is considered the tourist stronghold in the Faro region of southern Portugal.

Although Albufeira’s history dates back to the early Stone Age, which is considered proven mainly by the nearby caves with their unique drawings, the original city has been nearly destroyed by two disasters.

First it was the victim of an earthquake in 1755 and then later in 1834 it was almost completely destroyed by a great fire caused by liberal freedom fighters and supporters of the Portuguese King Miguel.

The town of Albufeira, defiantly extremely picturesque perched on a cliff, and encompassing the Atlantic coast in a semicircle, has a lot to offer.

In particular, the town is characterised by an attractive nightlife that lasts until the early hours of the morning, which makes it particularly attractive to young people. Discos and bars mainly dominate the old town and the Areias Joao de Sao district at this time.

Despite the building frenzy that prevailed in Albufeira in the 1970s and 1980s, the character of a typical Portuguese town has been preserved, especially in the old town, not least because of the ban on cars in the city centre since 1990.

Well worth renting a car in Albufeiera

To take in all the beauty of the area, a hire car is almost essential, although footpaths through the town of Albufeira, marked by “Tourismo”, are a no less interesting route. 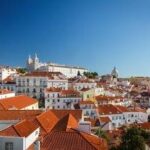