A hire car trip through Denmark is doubly worthwhile, preferably with the whole family.

On the one hand, the adventure of numerous bridges and ferry connections beckons here, on the other hand, the tranquility of rural roads.

Fast driving in the kingdom is only on the main routes, which account for barely two percent of the country’s road network.

Those not in a hurry can steer their hire car along dreamy coastal roads and through pretty little towns – a pleasure that not only enhances the popular holiday home vacation. For rental and travel by hire car we have compiled a few tips.

Denmark has several airports. By far the most important airport is located in the south of Copenhagen. Copenhagen-Kastrup Airport acts as an international hub and is also the largest airport in Scandinavia.

Most air travellers therefore enter the country via the country’s capital Copenhagen, but Billund and Aalborg are also regularly served from Germany. All the major hire car providers have a presence in Copenhagen. The Europcar, Hertz, Avis, Budget, Sixt and Enterprise stations are all located in Terminal 3.

Denmark has a well-developed road network. An off-road vehicle is only needed if you are deliberately heading for off-road routes. When it comes to the size of the vehicle, you should be guided entirely by their needs. There are no restrictions on ferries for normal cars. However, there may be additional costs for sidecars and motorhomes.

Hire car prices are at a high level in Scandinavia, and Denmark is no exception. One of the reasons is that massive discounts, such as on the Spanish islands, are unusual. On the other hand, you can expect perfectly maintained or almost new hire cars in Denmark.

You will get the best deal if you plan well in advance. Book your hire car a few weeks before your trip and compare the prices. This will also allow you to make significant savings in Denmark.

Weekly packages can have a price-reducing effect, as long as they can be brought into line with your flight and travel plans. Should you spend the first few days in Copenhagen after arrival or before departure, they will not need a hire car in the city.

We generally recommend the conclusion of a comprehensive insurance without deductible. In normal cases, they will not need this, but the relatively low expenditure in the event of a claim is worthwhile threefold: you save yourself the hassle of processing, dealing with the regulations abroad and possibly high costs.

There is value in insurance even if you don’t claim on it: It brings peace of mind – it’s a bit more like driving in your own country.

The sum insured of the liability insurance should be at least one million euros. If the selected landlord offers less, the so-called Mallorca policy helps, with which the benefit in case of damage is increased accordingly. Please also read our special about taking out insurance abroad.

The minimum age to hire car varies widely in Denmark. In some cases it is possible to rent from the age of 18, in others only from 23 with an additional fee if the renter has not yet reached the age of 25.

Also age limits, for example from 80 years, are quite common. Precisely informed should, regardless of age, driving novices. In most cases, one year of driving experience (period since issuance of the driver’s license) is mandatory.

All accessories – from snow chains to baby seats should be ordered well in advance so that they are in stock at the pick-up location. The rental company guarantees availability if ordered in advance. Otherwise, you can quickly run out of equipment, much like with umbrellas in a downpour.

The Danes’ knowledge of English is excellent, so communication is usually no problem as long as you are fit enough yourself. There are two main reasons for the Danes’ good language skills.

For one thing, they need the foreign language to communicate abroad, since very few people on earth speak Danish. Secondly, the education system is set up accordingly. English is normally taught to children from the third grade onwards.

With most providers, all mileage is included. If this is not the case, calculate generously when forecasting the distance driven. The north-south extent of Denmark is under 400 kilometres, so huge distances don’t exist. Germany is a good eight times bigger than its neighbour to the north.

The deposit varies depending on the rental company and car class. The amount – often three times the value of the rental – is blocked on their credit card. It is therefore important to keep an eye on the availability limit, so that you still have sufficient liquidity on holiday.

In most vehicle categories, a cash deposit is also possible. Premium vehicles, on the other hand, mandatorily require a credit card. Depending on the vehicle, several thousand euros are blocked on the card.

Smaller hire car providers occasionally run into problems at Copenhagen Airport because customers can’t find the pick-up location. Ultimately, however, the only thing that helps is to check with a location map in advance of the pickup. After all, the location outside the terminal results in price advantages, some of which can be passed on to the customer.

Trust is good, inspection is better. A short check of the recorded defects as well as the light function should always be done. However, serious defects in the vehicle are not to be expected with any of the providers in Denmark.

Driving in Denmark is very pleasant, tailgating is not part of the mentality. Most drivers are attentive and considerate.

Tolls do not apply, and most bridges are toll-free. The Öresund Bridge and the 18-kilometre Storebaelt Bridge are exceptions.

In Denmark, it is a legal requirement to drive with lights on, even during the day. The fines for a violation are severe and are the equivalent of more than 100 euros.

Promillegrenze:
The alcohol limit in Denmark is for driving at 0.5 promille. With a higher value you should not be caught. From 2.0 per mille, the vehicle is auctioned off by law without compensation, the money comes into the treasury. Repeat offenders – twice over 0.5 per mille within three years – are also affected by this law.

Special rules for holidaymakers do not exist, however, the auction paragraph does not apply to hire cars. Several thousand euros in fines must nevertheless be paid. As a rule of thumb applies: net monthly income x per mille number.

Sensitive are the penalties for other violations – from mobile phone at the wheel (200 euros) to worn tires – 135 euros per tire. Distance violations, wrong overtaking, driving on red or disregarding the right of way all hit the books with at least 270 euros.

When leaving the motorway, it should be noted that in Denmark there is no deceleration lane in the usual case. The speed must therefore already be reduced on the motorway to ensure a safe exit.

Occasionally, side roads are marked with so-called shark’s teeth, white prongs on the road. Vehicles on the main road must be given the right of way.

Parking or stopping on motorways and country roads is not allowed in Denmark unless specifically permitted. Parking / stopping at bus stops and pedestrian crossings is also prohibited. The minimum distance here is twelve and 10 metres respectively.

Suggestion of a round trip

Denmark: Between surf, romance and history

Take time for Copenhagen, for the harbour district with the Little Mermaid, for the amusement park Tivoli and the Renaissance castle Rosenborg.

The Free Commune of Christiania in the east of the city also welcomes guests; you’ll need to bring a bit of an adventurous spirit with you here.

You won’t initially need the hire car, if not for convenience already picked up at the airport on arrival, in the Danish capital. On the drive through the country, however, it performs good services.

To the Great Belt

Leaving bustling Copenhagen, we head southwest on the E20, taking a direct route to the Storebaelt Bridge (Great Belt Bridge), which connects eastern and western Denmark.

The distance of just over 110 kilometres can be covered in just over an hour, and there is no need to leave the E20. The Great Belt Bridge is a construction of superlatives – the crossing by car costs the equivalent of around 32 euros, which is worth it in every respect.

The eastern section of the structure, which lies between Zealand and the small island of Sprogo, is the longest suspension bridge in Europe, measuring 2,694 metres in length with a free span of 1,624 metres between pylons.

The pylons themselves are among the highest points in Denmark, standing over 250 meters tall. In total, the construction consisting of an east and west bridge, car road and railway line (tunnel and bridge) will bridge a distance of 18 kilometres. It has taken 18 years to complete.

After crossing the bridge, after a few kilometres on the island of Funen, you reach the university town of Odense, where the poet Hans Christian Andersen was born in 1805. A museum commemorates his work.

Children will get their money’s worth here by re-enacting the fairy tales. Also worth visiting is Odense Zoo, whose large Ozeaneum has gained fame beyond the country’s borders.

Esbjerg: enjoyment and culture on the Wadden Sea

The next day, continue on the E20 until you finally reach Esbjerg on the Wadden Sea of the North Sea. Several museums are worth a visit, including the Fisheries and Maritime Museum.

A pretty pedestrian zone invites you to stroll, and many good restaurants await in the area. The atmosphere is particularly nice at the Danish bar-restaurant “Dronning Louise”, which is just as suitable for a sumptuous meal as for a chat over a beer.

At around 30 kilometres, the route is short, but the destination all the more rewarding. We drive via Ribe to Skaerbaek, where the road branches off to the island of Rømø. On Rømø there is a four-kilometre-wide sandy beach that can even be driven on by car. It is considered the widest beach in northern Europe.

If you have enough time, you can relax on Rømø or continue your hire car trip north, where Aarhus and Aalborg await visitors. For those who need to get back: Copenhagen is barely three hours away by car.

Denmark beckons with many pretty towns and long beaches. Exploring by hire car promises a relaxing holiday with plenty to discover.

Everywhere the traveller is welcomed in a friendly manner. Who knows a little English, will have little trouble with the communication. 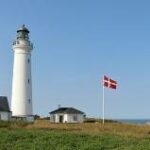